Learn how to use your superpower – your feminine energy to manifest the desires of your heart!

Allow the Passion Within to Manifest Your Soul's Desires

Be bold, go for gold!

The Empress Guide to Self Love & Self Care

You first have to love yourself, before you can love anyone else!

to mThe Journey is within

The Awakening of the Modern-Day Empress!

Are you scared to step into your Empress energy?  Have you been playing small trying to fit in, scared to stand in your Spirit?

Do you find it easy to give, but unable to receive?

Do you want to stop being a professional people-pleaser, stop pleasing others at the expense of your own soul’s values?

Are you ready to learn how to use your super power – your feminine energy to manifest the desires of your soul?

Our Spiritual body holds the Blueprint of our soul’s purpose.

Are you in alignment with your soul’s purpose for your life or are you following a belief system blueprint that is creating a reality that does not utilise your true potential?

What are you saying to yourself about your dreams, are your thoughts mostly positive?

The emotional body holds your emotions, are you accommodating joy, peace and happiness?

Or are you harbouring negative emotions from the past that is blocking you from manifesting your dreams?

Are you happy with the reality you’ve created?

If no, are you ready to change it?

Creating Heaven on Earth A Destiny Fit for an Empress!

Check out the five-part story of how Destiny took back her power and is on her way to creating a phenomenal reality.  She is deleting her internal hacker and tuned in to her soul’s voice and is creating a destiny fit for an Empress.

Join our private Facebook group for the  Modern-day Empress!

PART ONE: Time to have a Belief Blueprint Makeover 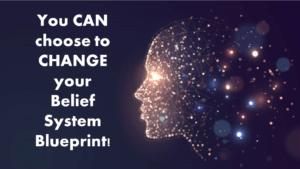 ONCE upon a time, there was a young girl called Destiny.  She loved watching the Empress movies and longed to be just like the Empress one day.  She admired the Empress’ resourcefulness, her kindness, confidence and her femininity.

Destiny’s received streams of whispered wisdom from her soul into her heart guiding her towards her destiny as an Empress.

Destiny was so excited, she was receiving powerful streams of messages from her soul’s wisdom her desires were being confirmed – she was an Empress in development.

Destiny was so excited, she decided to share her news with her school friends but she did not get the support she expected. They laughed at her and said ‘don’t be silly you could never be an Empress.’

To find out what happened next go to Part Two:

PART TWO: The wisdom of your Soul will block all external hackers 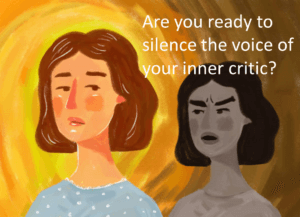 Several years had passed and Destiny was now a young woman with a job she hated, a home that was cramp and cluttered and did not serve her needs.  She was also in an on- again-off-again-relationship with boyfriend Edgy.

Destiny was living a life of survival and longed to thrive and create a life she would enjoy.

She was clearing out her cupboards when she came across a very dusty journal, when she opened it, she remembered her desire to be an empress.

She began to feel a glimmer of hope, but before she could turn the next page, Doubty Mouthy chimed in ‘don’t be silly you can’t be an Empress.’

Doubty Mouthy was always telling Destiny what she could not do and that she was a failure.

Unfortunately,  Destiny had been listening to and believing those lies for many years.

Doubty Mouthy had been created by external forces from Destiny’s childhood.

Destiny’s Soul’s voice could not be deleted, but Doubty Mouthy’s stream of nonsense was much louder, repetitive and the voice that Destiny had been believing.

While Destiny was soaking up the words in her journal, an advert came up on her computer.  It was a life coach called May, she was asking lots of questions that made Destiny think.  Destiny was transfixed to the screen, she was devouring the words that May was saying, her soul was hungry for this message. 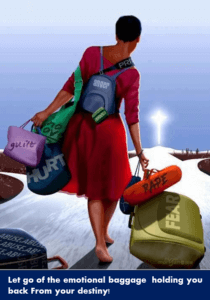 Destiny has been working with Coach May for the last 3 months and has already started to see changes in her life.

Doubty Mouthy has been fighting back, but Destiny learned from Coach May that Doubty Mouthy is just an old recording from her past, that is telling her lies.  Coach May taught her how to turn down the voice of Doubty Mouthy so that she can hear the whispers of her soul and receive guidance.

Destiny is now working on her emotional baggage.  Unfortunately Doubty Mouthy came with luggage, built up from the past.

Destiny realised that she had been feeling tired, demotivated helpless and hopeless because she had been carrying the extra emotional baggage from her past.

She has been doing meditation sessions and working with May on eliminating the negative emotions.  She is starting to feel lighter and has a lot more energy.  She is working on her dream of becoming a Modern-Day Empress.  She is so excited about her future.

She also realised that she has to let go of some people who have been weighing her down with their negativity and wanting to put her in a box.  She is resigning from being a professional people pleaser and is no longer worried about standing in her Soul’s dream.

Together with Coach May,  Destiny is on a mission to claim back her destiny. 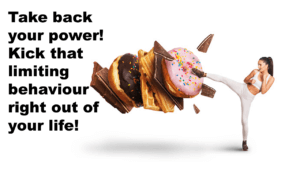 Destiny has just finished a session with Coach May.  She has been having coaching sessions for six months and feels like a new person with a new lease of life.

She has finally split up with Edgy and feels like a heavy weight has been lifted from her life.

There is still room for progress, but at least she is heading in the right direction.  She has moved out of the cramped apartment and now lives in a spacious apartment with a home office.  She no longer does a job she hates, she is running her own business and changing lives including her own.

She has an early morning routine that she practices faithfully.  She does this to knock out the early morning hacker Mouthy Doubty.  She gets very little interference from Mouthy Doubty these days and is always able to tune into her soul’s wisdom to feel empowered, inspired and motivated.

She starts her day with gratitude, visualizing her goals, incantations and goes for morning walks in nature.  She practices daily meditation and her new love of breathwork is really changing how she shows up in the world.

Her morning routine is vital for her success, this part of the day is devoted to connecting and receiving nourishing wisdom from Spirit!

She is well on her way to manifesting her goals and enjoy a destiny fit for an Empress.

PART FIVE: Are you happy with what you've manifested, so far, if not did you know that you can upgrade your reality? 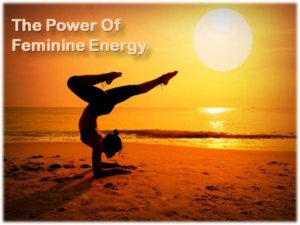 Destiny has arrived at her true destination. She knows her true identity and is a masterful manifesting Empress.

This story is really about you, you are Destiny becoming the Empress who is able to claim back her true destiny.

You may have been playing small, not wanting to upset the people around you, who want to keep you in a box.

You did not come to this realm to play small, but to play full out.  You came here to manifest a life less ordinary.

When you are spiritually, mentally, emotionally and mentally aligned shift happens.

You become who you were always meant to be.  Negative people in your life are replaced by positive ones.  You manifest your desires effortlessly.  You only notice those who love you and who are rooting for you to live your dreams.

Don’t give up on yourself, you are too valuable to just live a mediocre existence, you are fit for the life of an Empress.  You have always been the Empress but your birthright was stolen from you and replaced with lies that have kept you living like a pauper when really you are a sovereign Being!

If you would like to claim back your birthright book a one-hour free soul discovery session!

Should I Stay or Should I Go?

Are you struggling to make a decision about your relationship?

Are you confused about whether you should stay or go?

Bounce Back After a Breakup

Are you struggling after a breakup and feeling stuck, still mourning the past?

Are you ready to bounce back and move towards the light and create a brighter future?

Are you ready to call in the One?

Are you ready to attract the love you desire and are not willing to leave it to chance?

Have you been working on yourself and know worth and not willing to settle for anything less than you deserve?

The Empress Is Ready to Meet Her Emperor

When you balance the feminine and masculine within yourself, you are now ready to invite love into your life – the Empress is ready to meet her Emperor!

Working as a Clairsentient Wellbeing Coach and Relationship Agony Aunt has allowed me to connect with thousands of people throughout the last 20 years.

I help you clear the noise of your internal hacker so that you can tune in to the wisdom of your soul.

I provide a safe, sacred space for you to claim back your destiny.   I am here to serve.  I will support you in manifesting your soul’s desires.

Are you ready to honour your soul’s values?

Outstanding!
“Loved my call with Imani, straight to the point and absolute clarity, what a lovely person too !!”
Client (122180581)

“Great coach. On point with everything thank you so much. “ 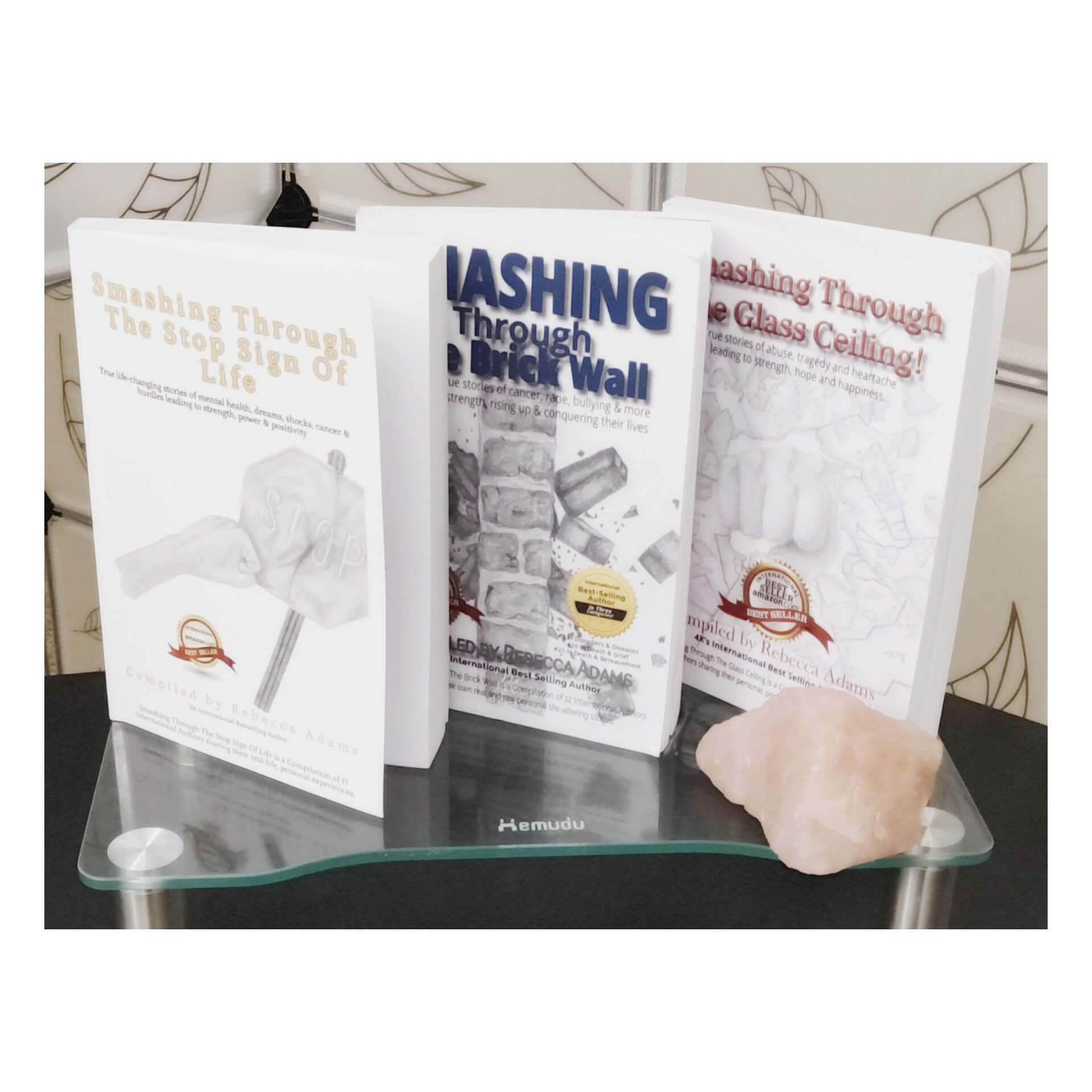 The Smashing through series is a trilogy compiled by 6x best-selling author and publisher, Rebecca Adams.  The books’ theme is about Real-life challenges that ordinary people have overcome.

You can get your personalised signed copy when you order here

Get Your Signed Copy 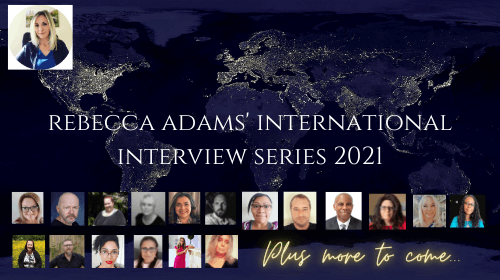 The International Interview Series created by Multi-talented Entrepreneur Rebecca Adams is all about people empowering people.

Thirty coaches, in thirty days, sharing business tips, overcoming adversity and how to activate and utilise the power of the mind.

It is held in November preparing you for a memorable new year! 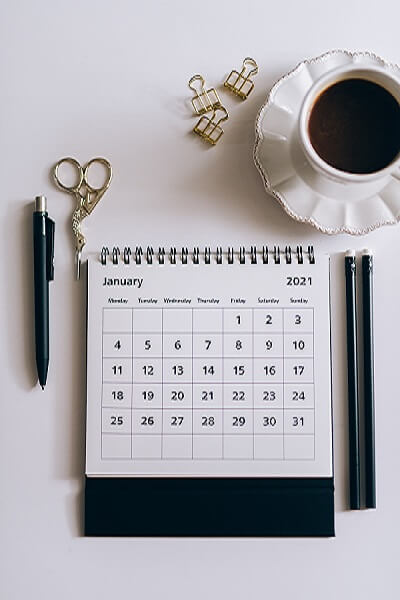 Book Your Free One to One Discovery Session

Book your free 1:1 soul discovery session.  The session lasts approximately 1 hour.  This is an interactive experience.  You will come away feeling uplifted and ready to take action! 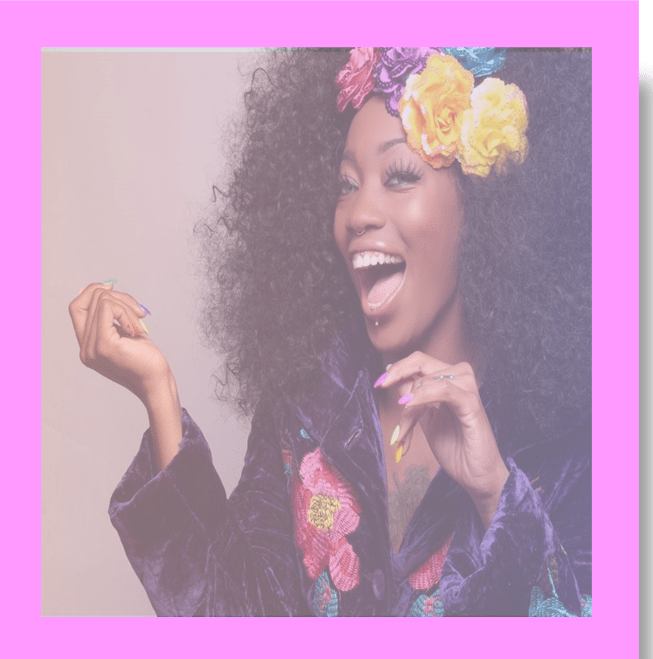 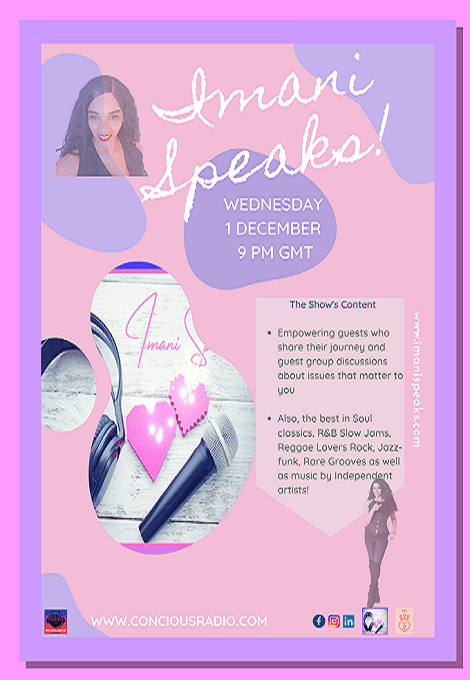 Imani Speaks Show has been running for 8 years.  She was awarded Presenter DJ of the Year in 2018.  Imani now broadcasts on Concious Radio Mondays 6-8 pm soon to be Wednesdays 9 pm-late in
December 2021. 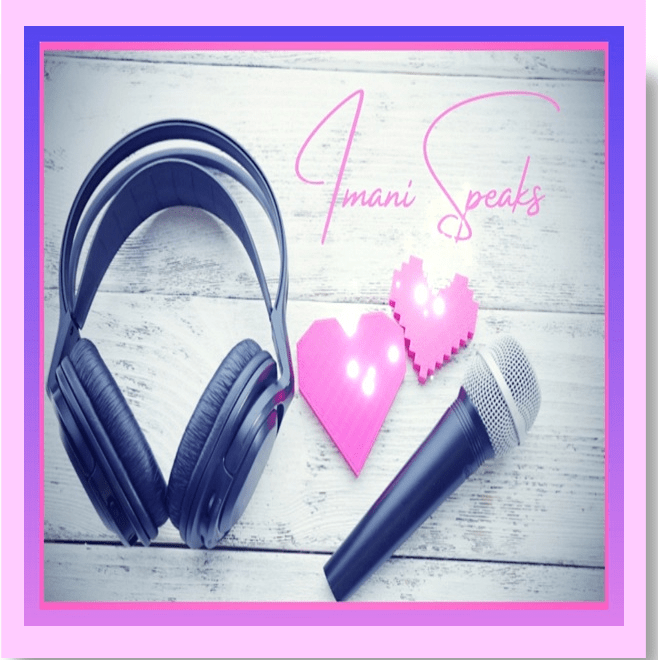 Check out my podcast on Spiritual growth, health & wellbeing and Guest interviews.

From Caterpillar to Butterfly.  “Chase Your Bliss.”  Manifest The Dreams That Have Always Been Inside You!

Each morning you awaken to that which is looking through your eyes back at you. When you are ready, the divine presence will show you the way back to the real you.

Throw out the early learning downloads that are not working for you.  Connect with the divine presence within you ready to guide you to your destiny.

You are a sentient being who has the ability to change your life by changing your blueprint.

Listen To The Whispers of Your Soul.  Follow Your Path Today!

The Wisdom of the Modern-Day Empress Dismiss